Son, 28, is second among active KBO hitters with a career .323 batting average and has hit at least .300 in each of his past seven seasons. He has spent his entire 10-year career with the Lotte Giants.

Son helped South Korea win the 2014 Asian Games gold medal by going 6-for-16 with four RBIs and four runs scored. Then at the 2015 Premier 12, he was 4-for-12 while driving in a run and scoring three times.

South Korean manager Kim In-sik first unveiled his 28-man roster in November, but teams are free to make changes until the Feb. 7 deadline. Kim's hand has been forced already with mounting injuries and off-field incidents. 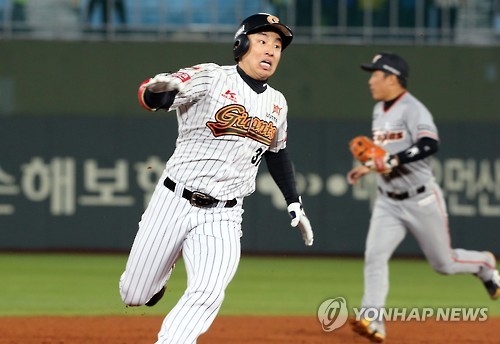 Kim Hyun-soo took himself off the team under thinly veiled pressure from the Orioles, with manager Buck Showalter expressing his misgivings about his players' WBC participation through the local press.

Since the WBC is actually organized by Major League Baseball (MLB), clubs can't officially force the players to skip it. But the WBC, now in its fourth edition, has always been played in March, at a time when big leaguers are getting ready for new seasons in comparatively leisurely spring training games, instead of competing in more high-intensity affairs with national bragging rights at stake.

Kim was only a part-time player as a rookie last season, making only 346 plate appearances in 95 games, and will need to further establish himself in spring training next month.

Another big league outfielder, Choo Shin-soo of the Texas Rangers, is in limbo, as his club has filed a request with the WBC organizers to keep the veteran out of the tournament.

The KBO expects to learn of Choo's fate sometime after next Friday.