SEOUL, Jan. 13 (Yonhap) -- Leading whisky brands in South Korea are resorting to law violations to push up sales for the Lunar New Year holiday and make up for the slumping market, industry officials said Friday.

Liquor companies market specially packaged gift sets for the holiday when tens of millions of South Koreans travel to their hometowns with presents for family and kin. A whisky gift set commonly consists of a 700 milliliter bottle with an extra miniature 50 ml bottle, both of which must have electronic tags, known as radio frequency identification (RFID), attached.

Industry officials said they have discovered a number of cases where the smaller bottle did not have the tag.

Customs law requires that all whisky being sold locally carry RFIDs. The purpose is to prevent tax evasion by entertainment establishments, the major buyers of liquor, that underreport purchases and sales, and to stop fake products from circulating in the market. Violating this law can be punished with up to 20 million won (US$16,909) in fines for the manufacturers.

The only exemptions are for whisky supplied to the military or manufactured for exports, and products that have been given advance waivers by the customs agency.

"Brands that have been performing badly appear to be overstretching themselves to drive up the sales," an industry official said. "Not attaching an RFID is a clear violation of the law."

The local whisky market has been contracting for the past eight straight years. In the case of Pernot Ricard Korea, its sales dropped to No. 3 in the market last year for the first time since its entry to South Korea 20 years ago.

"Unless eligible for exemptions, all whiskies have to carry an RFID," a National Tax Service official said. "Those found in violations can be subject to penalties." 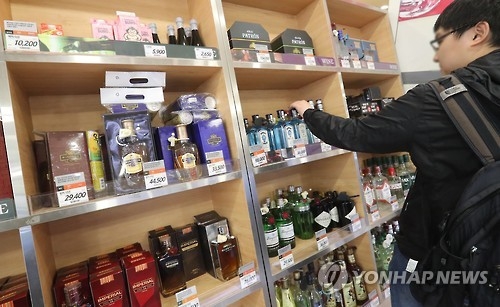