SEOUL, Jan. 13 (Yonhap) -- The floor leader of a conservative splinter party on Friday accused opposition presidential hopefuls of trying to revive an appeasement policy toward North Korea which it deemed a failure.

Rep. Joo Ho-young of the Barun (righteous) Party to be launched later this month called for stringent screenings of the liberal politicians' views on the communist country.

"Presidential hopefuls from the opposition parties are suggesting policies similar to the Sunshine Policy which ended in failure," he said during a meeting of its preparatory committee.

The policy initiated by late former President Kim Dae-jung in the late 1990s was aimed at pursuing reconciliation and cooperation with the North.

Joo claimed that if South Korea had continued to toughen its containment policy on Pyongyang when it suffered a period of extreme famine in the 1990s, the North Korean regime would have collapsed.

"The lavish aid let the North extend its life and develop nukes and missiles. Such a failure should not be repeated," he said.

He claimed China is using the planned deployment of the Terminal High Altitude Area Defense system as a pretext to weaken the Seoul-Washington alliance and that Seoul should push ahead with the plan.

The splinter group earlier faced criticism as its platform unveiled last week stated that the party will "respect" the two inter-Korean summit agreements signed in 2000 and 2007 under the two liberal administrations.

The landmark agreement in 2000, which came in line with the Sunshine Policy, paved the way for inter-Korean exchanges and cooperation, which was halted due to North Korea's continued nuclear tests and armed provocations.

The party, established by former Saenuri lawmakers, has been struggling to strike a policy balance to win over both conservative and progressive voters. 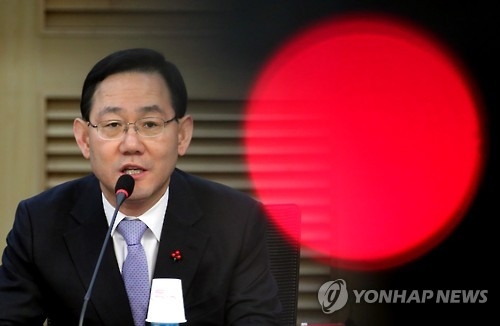