(ATTN: UPDATES with statement by monetary policy board of BOK; ADDS background; CORRECTS to 'raise' in 5th para)

The Bank of Korea maintained its policy rate at an all-time low of 1.25 percent in January after sending the rate to the lowest level to support the growth of Asia's fourth-biggest economy. 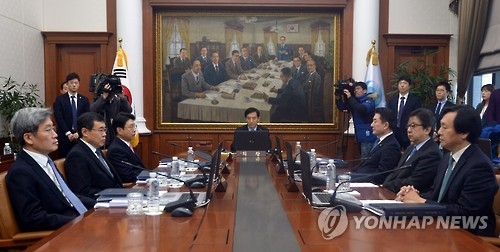 "As the inflationary pressures on the demand side are not expected to be high, given the moderate pace of domestic economic growth, the board will maintain its stance of monetary policy accommodation," the BOK monetary policy board said in an English-language statement.

The board also said it will closely monitor the uncertainties in domestic and external conditions and their effects, the progress of monetary policy normalization by the U.S. Federal Reserve and the trend of increase in South Korea's household debt.

In December, the U.S. Federal Reserve raised its key rate by a quarter of a percentage point to a target range of 0.5 percent to 0.75 percent. The Fed is widely expected to raise the rate three more times throughout this year.

Exports fell 5.9 percent to US$495.5 billion in 2016 from a year earlier due to declines in global demand and low oil prices, according to government data.

The BOK monetary policy board projected that the local economy will likely continue its trend of moderate growth going forward and the growth rate of the gross domestic product for this year could be in the mid-2 percent range.

Still, it said the trend of recovery in domestic demand is expected to be limited, due to deteriorations in economic sentiment, for example, but exports will likely improve thanks chiefly to the global economic recovery.

The freeze came amid lingering concerns over South Korea's growing household debt, one of the highest levels in the world compared with income levels.

South Korea's overall household debt reached a record high of 1,295.8 trillion won (US$1.07 trillion) as of end-September, according to BOK data.

In New York, South Korea's Finance Minister Yoo Il-ho vowed Wednesday to get the country's mounting household debt under control and prevent it from spreading to systemic risks.