The main opposition Democratic Party assailed Ban over his attempt to ally with conservative forces and corruption allegations surrounding his relatives.

"I wonder what Ban is going to do with those who messed up the country while enjoying power and privileges under the Park Geun-hye and Lee Myung-bak administrations for the past 10 years," Rep. Choo Mi-ae, who heads the main opposition party said.

Choo also raised questions about his ethical qualification citing the U.S. indictment of his brother and nephew on bribery charges.

"Ban cannot even keep his relatives in check," Choo said, adding his candidacy will humiliate the country once again following the latest corruption surrounding President Park which led to her impeachment last month.

Moon Jae-in, former head of the Democratic Party and the leading liberal presidential hopeful, said he will not respond to any questions related to his potential rival.

Moon and Ban had long been neck-and-neck in opinion polls. Moon was ahead of Ban this week by 27.9 percent to 20.3 percent in a survey by RealMeter.

"We need to contemplate what he meant by a change of politics," said Rep. Choung Byoung-gug, the chief of the preparatory committee of the Barun (righteous) Party, which will be launched later this month by those who bolted from the ruling Saenuri Party.

Choung criticized Moon's "narrow-minded" tactic of ignoring Ban as an attitude that should be the target of a campaign to change politics. 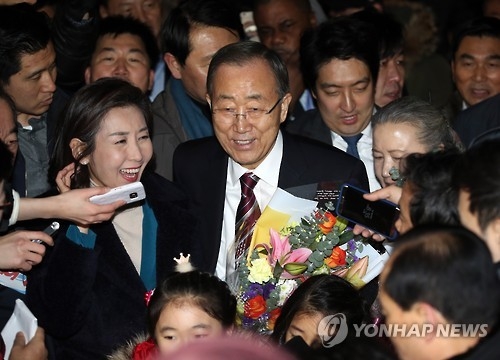