A day after his return home, Ban carried out his first official event by visiting the tombs of former Presidents Rhee Syng-man, Park Chung-hee, Kim Young-sam and Kim Dae-jung at the Seoul National Cemetery.

"I have come home after I, as the U.N. secretary-general, strove for world peace, security and development over the last decade," he wrote in the visitors' book at the cemetery. "I will do my best, though my capability is limited, to help the Republic of Korea make a great leap forward." 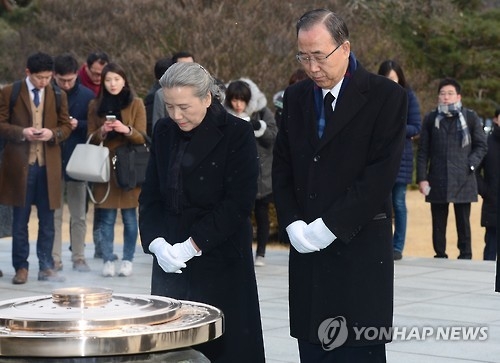 Ban, who completed his second five-year term at the end of last year, has yet to officially declare his bid for the country's presidency, but he has repeatedly signaled his strong presidential ambitions.

During a press conference held on Thursday, he reiterated his ambitions for the country's top elected office, highlighting his resolve to work "for a change in politics, not for a change of government" -- a message largely seen as a challenge to establishment politics.

In a meeting with reporters before his visit to the cemetery, Ban said that he plans to call impeached President Park Geun-hye to offer a New Year's greeting.

"(Park) is (still) the head of state, and I have yet to offer my New Year's greeting to her," he said. "Anyway, I think it is right for me to give her a call."

His remarks came amid rumors that Ban is seeking to distance himself from the unpopular president. Park was impeached by parliament on Dec. 9 over a corruption scandal involving her and her friend.

After his visit to the cemetery, Ban was set to visit a community center to register as a Seoul citizen.

Over the weekend, he plans travel to Eumseong, South Chungcheong Province, to visit his 92-year-old mother and the grave of his father.