The K League Classic club said they received Dijon's formal offer to acquire Kwon and will begin talks for the 22-year-old's transfer.

Kwon, who made his pro debut with Suwon in 2013, has been one of South Korea's brightest young footballers. He gained stardom in 2015 after scoring 10 goals in 35 K League matches, while making his name with the senior national team in World Cup qualifiers.

Kwon mainly played for the under-23 national team last year, helping South Korea reach the quarterfinals at the Rio de Janeiro Olympics. He has scored 10 goals in 19 matches for the U-23 squad and has bagged three goals in eight matches for the senior side.

According to Suwon, Dijon first made an offer in December, saying they wanted to have Kwon on loan for free for six months before giving him a permanent deal. After Suwon rejected the initial proposal, an agent associated with the French club then made a verbal offer that Dijon would pay 1 million euros (US$1.06 million) for Kwon. The South Korean club, however, refused it again, saying the transfer fee wasn't enough and that they wanted to see official documents.

Sources said Dijon sent papers to Suwon on Thursday night and offered to pay a transfer fee of 1.2 million euros. The French outfit also reportedly promised to share a transfer fee with Suwon if Kwon moves to another club in the future.

Dijon, founded in 1998, earned their promotion to the French Ligue 1 last season. They are currently ranked 15th in the 20-team league with four wins, seven draws and eight losses.

Suwon, the reigning Korea Football Association Cup winners, said their players will fly to Malaga, Spain, later Friday for offseason training, but Kwon will not travel with the squad.

"Since Kwon wants to play in Europe, we will negotiate with a positive mindset to help the player," a Suwon official said. "But it's a pity that Kwon's value is underrated because he hasn't completed his mandatory military duty."

All able-bodied South Korean men between the ages of 18 and 35 must serve in the military for about two years. Athletes, however, can be exempt from the draft if they win an Olympic medal or grab a gold at the Asian Games. 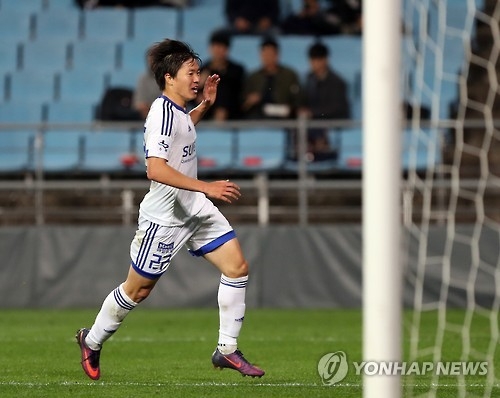 Suwon to start negotiations with French side Dijon over midfielder transfer

Suwon to start negotiations with French side Dijon over midfielder transfer