SEOUL, Jan. 13 (Yonhap) -- South Korea's central bank held its key rate at a record low level on Friday, though it revised down its growth forecast for this year, citing the slowing economy.

The Bank of Korea left the base rate at 1.25 percent for a seventh consecutive month in January, while it cut its forecast for gross domestic product this year to a growth of 2.5 percent, from 2.8 percent projected in October.

The BOK's growth estimate is also lower than the government's forecast of a 2.6 percent growth released at the end of last year. 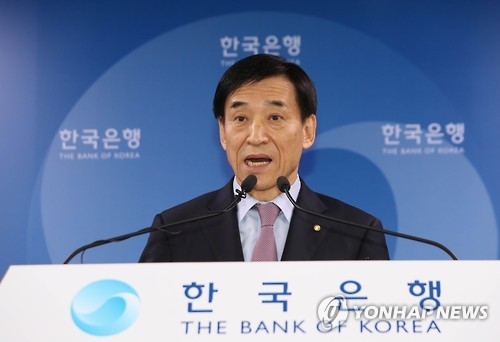 "Rapid changes in situations at home and abroad following the previous estimate in October are behind the downward revision of the economy," BOK Governor Lee Ju-yeol said in a news conference, referring to the strength of the U.S. dollar, a U.S. rate hike and a possible further rate cut and concerns on trade protectionism and slowing domestic demand.

The BOK said the South Korean economy could continue its moderate growth this year driven by improving exports and facility investments, though it said private consumption and construction investment will remain weak throughout the year.

The quarterly revision by the BOK comes amid political uncertainties following the parliament's impeachment of President Park Geun-hye over a corruption scandal involving her confidante.

The Constitutional Court is set to determine whether to uphold or overturn the impeachment by early June.

The central bank said the economy could expand 2.8 percent in 2018 helped by increased exports and facility investment amid global economic recovery.

For the whole of 2015, the economy grew 2.6 percent, much lower than the 3.3 percent growth the BOK forecast a year earlier.

Earlier in the day, the BOK maintained its policy rate at an all-time low of 1.25 percent.

"As the inflationary pressures on the demand side are not expected to be high, given the moderate pace of domestic economic growth, the board will maintain its stance of monetary policy accommodation," the BOK monetary policy board said in an English-language statement.

The board also said it will closely monitor the uncertainties in domestic and external conditions and their effects, the progress of monetary policy normalization by the U.S. Federal Reserve and the trend of increase in South Korea's household debt.

In December, the U.S. Federal Reserve raised its key rate by a quarter of a percentage point to a target range of 0.5 percent to 0.75 percent. The Fed is widely expected to raise the rate three more times throughout this year.

Exports fell 5.9 percent to US$495.5 billion in 2016 from a year earlier due to declines in global demand and low oil prices, according to government data.

The freeze came amid lingering concerns over South Korea's growing household debt, one of the highest levels in the world compared with income levels.

South Korea's overall household debt reached a record high of 1,295.8 trillion won (US$1.07 trillion) as of end-September, according to government data.

Lee said he does not believe that there will be any dramatic change in housing prices.

In New York, South Korea's Finance Minister Yoo Il-ho vowed Wednesday to get the country's mounting household debt under control and prevent it from spreading to systemic risks.