Kim on Thursday joined South Korean giants Jeonbuk Hyundai Motors on a four-year deal, ending his stint with the German Bundesliga side. The 24-year-old defender is a native of Jeonju, North Jeolla Province, the hometown of Jeonbuk, but has never played in the South Korean pro league. He made his pro debut with Japanese outfit Albirex Niigata in 2012 before signing with Hoffenheim two years later.

"I've never played in the K League Classic, so it's a challenge to me," Kim said at Incheon International Airport before Jeonbuk left for Dubai, the United Arab Emirates (UAE), for offseason training. "I will try to give myself a chance to play in Europe again."

Kim made 34 league appearances for Hoffenheim the last two seasons but hasn't played a single match since 29-year-old manager Julian Nagelsmann took over the club for the 2016-17 season. The South Korean footballer said it would be a lie if he said he felt no pain.

"In addition to not playing a game, it was difficult for me to think that I wasn't getting recognition from the team," he said. "But I did my best in training and practice games, so I just want to think that I had good experience."

Kim said he selected Jeonbuk even though there were offers from other European clubs.

"I was trying to find the club where I can recover my form," he said. "It's my hometown club. The coach (Choi Kang-hee) also wanted me and they are the winners of the Asian Football Confederation Champions League."

Kim has 22 caps for South Korea, but hasn't represented the Taeguk Warriors since March 2016. He said he isn't thinking about playing for the national team at this moment.

"My first goal is to play some matches with Jeonbuk," he said. "I haven't played many games, so I may not be fit like other players. I will do my best to build up my fitness and form." 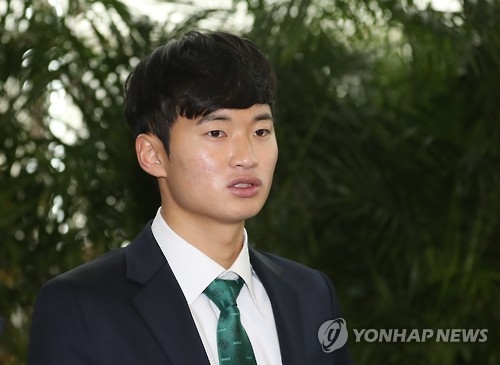