"I was occupied with the thought that I have to do well, so that I could change the rampant prejudices about idol singers acting," the singer-actor confessed during the media conference held Thursday in Seoul, addressing the common preconception that idols often have poor acting skills.

"That's why I studied a lot on my own and asked friends as well as observed senior actors on set and practice," he said, mentioning his endeavors to break the stereotype.

The event was attended by the starring actors of the drama -- Jeong Kyung-ho, Baek Jin-hee, Choi Tae-joon, Lee Sun-bin and Chanyeol -- who introduced their roles in the new series and answered questions from reporters.

The new MBC drama, set to premiere on Jan. 18, revolves around nine people, including a washed-out musician, former bandmates, a resourceful stylist, a rising actress and CEO and other employees of the fictional Legend Entertainment agency. They become stranded on a deserted island after their private jet crashes in the ocean. 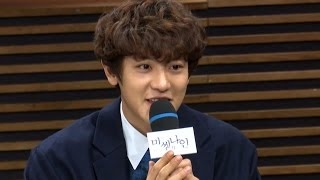