The wage freeze, if taken, will be the first of its kind since 2009.

"The company is already taking emergency measures to overcome many difficulties, such as an economic downturn, slowing sales and a drop in operating profit, while company executives have voluntarily cut their own wages by 10 percent," the group said in a recent e-mail sent to all company employees.

"Still, additional measures are urgently needed to overcome such a crisis," it said, adding it had no choice but to freeze the wages of some workers. 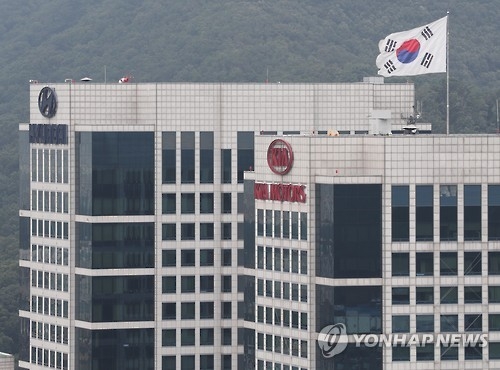 The wage freeze will affect those in managerial posts at Hyundai Motor Co. and Kia Motors Corp. starting from department chiefs and up.

The group did not provide a specific number of workers to be affected, but said the move will likely be applied in all other affiliates of the group that include Hyundai Mobis Co., the country's largest auto parts maker.

Workers at the group's production facilities apparently will not be subject to the planned wage freeze.

"The global auto industry is expected to face many difficulties this year as its annual growth is forecast to fall to the low 1 percent range," a Hyundai Motor official said.

The group earlier set the combined sales target of its two automaking units -- Hyundai and Kia -- at 8.25 million cars this year, which will mark a 4.7 percent rise from about 7.88 million vehicles sold globally in 2016.