SEOUL, Jan. 13 (Yonhap) -- Members of the South Korean group Girls' Generation attended a promotional event for the upcoming film "Confidential Assignment" to congratulate member Yoona on her big screen debut and wish the best for the movie.

"We hope Yoona's first-ever movie will be a phenomenal success," Seohyun and Yuri said Thursday at an exclusive press conference held at CGV-Yeongdeungpo in western Seoul.

Hyun Bin, who stars as a North Korean cop, together with his Southern counterpart Yoo, hunts down a North Korean crime ring hiding in the South. Yoona plays Yoo's sister-in-law and the love interest of Hyun Bin's character.

Earlier this week at the first public event for the film, Yoona expressed delight in her new role saying, "I was attracted to the character because it resembles me a lot. I tried to be myself while acting -- bright and cheerful." Many fans are looking forward to see how she brings out her character on the big screen.

The film is directed by Kim Sung-hoon, who was behind the movie "A Wonderful Moment" (2013). 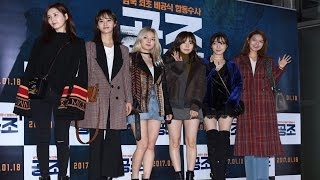