Naver's autonomous vehicles have already passed a performance test conducted by the Ministry of Land, Infrastructure and Transport and are awaiting permission for test runs, officials said.

Naver's unmanned vehicles will be operated on roads exclusively for such vehicles when the approval is issued. The ministry has designated sections of existing roads, totaling 375 kilometers in total length, for testing the cars.

"The process of setting up Naver Labs -- Naver's subsidiary firm in charge of R&D for self-driving cars -- is ongoing," said a ministry official who asked not to be named. "The approval will be issued as soon as the process is completed."

Earlier, Naver announced that it will launch an independent company tasked with developing self-driving cars, robots and AI.

Market watchers forecast permission to be granted sometime next month.

Ten local automakers and research institutes have already operated their self-driving cars on the roads.

Once given the green light, it would mark the first time for a local IT company to test-drive its self-driving cars.

"Our car is at the level 3, which is just below level 4 when drivers can close their eyes during driving," said Cheong Ji-hoon, a Naver official.

A level 3 self-driving car refers to an autonomous car that can fully assume the control of all safety-critical functions in certain conditions, while it automatically senses conditions that require the driver to retake control and provides a "sufficiently comfortable transition time" for the driver to do so.

Naver has been making efforts to nurture the sector as the self-driving has emerged as one of the most profitable AI platforms.

Naver earlier said it will invest 500 billion won (US$425.4 million) over the next five years into developing technologies in AI and self-driving cars. 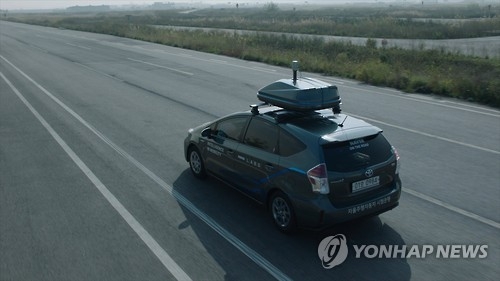