DAEJEON, Jan. 13 (Yonhap) -- Former South Korean league pitcher Park Hyun-joon, banned for life for match fixing, on Friday urged a gathering of rookies not to make the same mistakes that he did.

Park, who once pitched for the LG Twins in the Korea Baseball Organization (KBO), gave a lecture on pitfalls of match fixing during the league's rookie orientation, attended by 130 first-year players at a hotel in Daejeon, some 160 kilometers south of Seoul.

In 2012, Park received a suspended jail term and a fine of 7 million won (US$5,950) on match-fixing charges. Once a top pitching prospect who won 13 games in 2011, Park, now 30, instead became the poster child for one of the KBO's worst off-field scandals.

Park said he initially had reservations about speaking to the players, but decided he had "an obligation" to talk about his mishap.

"I was once a player in this league and I left a bad precedent," he said. "I haven't prepared much, but I know you will still learn a great deal just by seeing what I've gone through."

Park said temptations to fix games are never too far away, since they can even come from their teammates, and told the rookies to always keep their parents in mind.

"If you think about your parents, you won't succumb to that pressure," Park said. "I know more than 90 percent of you have had a tough journey to get to this point, but you weren't the only ones who've had it hard. Your parents were there supporting you along the way. If you keep that in mind, you should never resort to match fixing."

Park said he has a lot of regrets over what he did.

Park was scheduled to speak for 30 minutes, but abruptly left the stage after 10 minutes while fighting back tears. 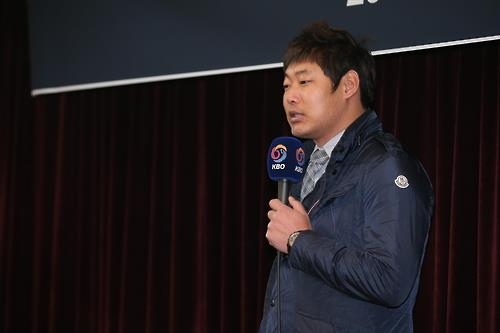