SEOUL, Jan. 13 (Yonhap) -- Experimental post-rock bands Mono and Jambinai will play a joint concert in Seoul later this month, according to organizers Friday.

The joint gig will be held Jan. 21 at 6 p.m. at the Platform Changdong 61 in northern Seoul. It is part of Mono's world tour promoting its ninth studio album "Requiem For Hell" released last October.

Founded in 1999, Mono is a Japanese band whose sound is instrument-heavy and experimental. The band has become a household name in the post-rock scene, along with bands such as Mogwai and Explosions In The Sky.

Jambinai is a three-member Korean band formed in 2009, known for its signature sound from mixing Korean folk instruments with traditional metal and post-rock arrangements.

The band signed with British label Bella Union in 2015 and released the album "Hermitage," which was received well by critics.

Tickets are available through the Internet portal Naver. 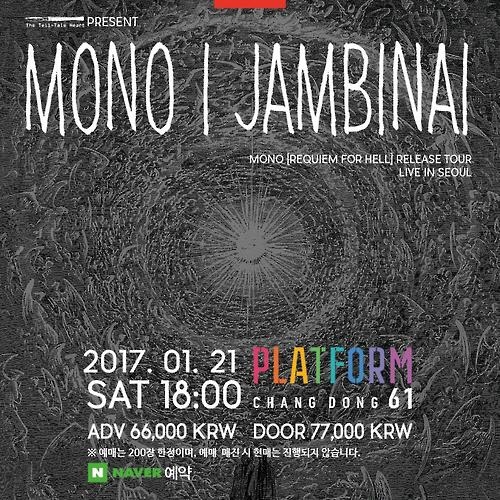