Kang calls the shots on the Golden Time Team, situated in the district with the highest crime rate in the country, whose principal task is to take any necessary measures to save the caller in life-threatening situations within the usual time limit for his or her survival: three minutes. The term "golden time" refers to the period of time after traumatic events begin where prompt care can prevent deaths. It was used in real life during the sinking of the Sewol ferry in 2014.

Meanwhile, detective Moo is still tortured by a criminal case that cost him his wife's life. Although Kang is apparently responsible for failing to rescue her in time (resentment against her should be self-explanatory), he decides to partner with Kang to track down the obscure mastermind behind the murder and solve the unfinished business with him.

The teaser is packed with suffocating suspense that thrill-seekers will enjoy. It features Moo lamenting his loss and being enraged at the murderer, who has wrecked his entire life, and empowering phrases like "You've only got three minutes" and "Save the lives that are on the line."

The first episode of "The Voice" is set to be broadcast Saturday at 10 p.m. on OCN. 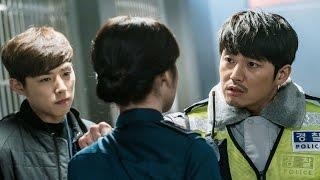 Final teaser of 'The Voice' is unveiled

Final teaser of 'The Voice' is unveiled