SEOUL, Jan. 13 (Yonhap) -- United States Amb. to South Korea Mark Lippert bid farewell to the country he dedicated more than two years of his foreign service to on Friday, saying he will carry a special impression of South Korea for the rest of his life.

Lippert announced that he is to leave on Jan. 20 during a press conference held in his ambassadorial residence Habib House in central Seoul.

Known for his close personal ties with President Barack Obama, Lippert began work here in November 2014 in what became more than two years of serving as envoy. His tenure here has been marked by the surprise knife attack in 2015 during an early morning public gathering in the capital.

The attack by a pro-North Korean activist was, however, easily overshadowed by Lippert's undaunted public diplomacy activities to engage with the South Korean people, earning him a name as one of the most beloved American ambassadors ever.

"This has been an incredibly rewarding experience, both personally and professionally, for my entire family. It has made a profound and indelible impression on all of us, impressions that we will carry with us for the rest of our lives," Lippert said, referring to his wife and two children, both born in South Korea.

"I have come to care deeply, almost beyond words, for the Republic of Korea, its people, its culture, past present and future," he said, calling his forthcoming departure "bittersweet."

He also referred to the 2015 attack as one of the most memorable events during his stay here, saying he received "outpouring of support" from South Koreans after the attack. "This hospitality, good will and friendship will always be with us."

He cited joint response to North Korea's threats, subsequent adoption of tougher sanctions, augmented joint missile defense and tightened Seoul-Washington-Tokyo cooperation as major achievements between South Korea and the U.S. during the Obama administration. "We are incredibly proud ... to get to the point where we can make a simple, yet immensely powerful statement that the alliance is the best it's ever been," he stressed.

"We need to build on this great foundation and seize the opportunity for deeper cooperation ... We need to write the next chapter, ensuring peace and prosperity for all of our peoples in the 21th century," the outgoing envoy said.

Summing up Obama's North Korea policy, the ambassador highlighted the outgoing administration has always kept the door open for talks with North Korea although Pyongyang's refusal to engage in dialogue led to a policy shift to heavier sanctions.

"We were disappointed that North Koreans did not respond to a number of entreaties for dialogue. It's in sharp contrast to Iranians, Cubans and the government in Myanmar. All reciprocated and engaged in principled diplomacy," he said.

"It's not surprising that they haven't seemed to be willing to talk to anybody, including the Chinese, inter-Korean channels and U.S. New York channels. They declared that dead," he went on. "So their attitude right now is they don't want dialogue or negotiations, so that shifted our policy at a pragmatic reason to a different posture," he said, referring to the stringent sanctions regime adopted in the latter part of Obama's terms.

Still, the administration believed the ultimate goal of the sanctions was to get the North back to the table, according to Lippert.

"Even though they don't want talks now doesn't mean they may not want talks in the future. So the Obama administration's policy has always been to keep that dialogue channel open and the possibilities of renegotiation open as well... that the North will come back to the table," he noted.

Defending Obama's North Korea policy, the ambassador also stressed that the hallmark of the president's tenure is "principled, pragmatic foreign policy that looked for the best solution. If that includes negotiations, sanctions and defense deterrence as Obama's three-throng strategy does, that has been arrived at through hard analytics, hard thoughts and pragmatic thinking ... to get at very, very dangerous and serious nuclear programs in the North."

"President Obama made that clear he is the first American president to publicly endorse a unified Korean Peninsula under a democratic government, a free market economy, a country that respects the universal human rights of its people. That's the vision, that's the dream (the countries) share," he said.

Lippert also cast a rosy picture of future South Korea-U.S. relations under the incoming administration of Donald Trump, citing an array of recent high-level personnel exchanges between Seoul and the new administration, saying "The early context (of the relationship) has been good, productive and are encouraging." 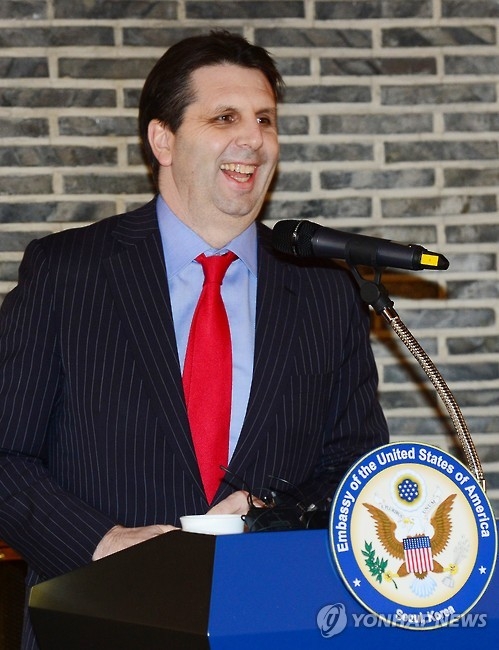