SEOUL, Jan. 13 (Yonhap) -- Acting President and Prime Minister Hwang Kyo-ahn on Friday reassured scientists and engineers that the government will go ahead with its long-term plan to support the development of transformative technologies including artificial intelligence (AI), connected cars and new materials.

During a New Year's greeting with science and information technology professionals, Hwang stressed that the current keyword of the world economy is the fourth industrial revolution, urging efforts to stay ahead in the increasingly stiff global industrial competition.

It refers to the ongoing industrial transformation driven by the convergence of cutting-edge technologies such as AI, the Internet of Things, and virtual and augmented reality applications.

"(The government) will push for a national strategy project to develop core AI technologies," Hwang said. "We will try to secure world-level technological capacity."

"Late last year, the government devised a comprehensive mid- and long-term plan to prepare the country for the intelligence and information society," he said. "Based on this, we will make all policy efforts to preemptively cope with the fourth industrial revolution." 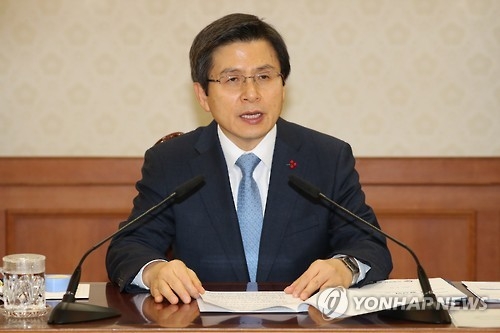