SEOUL, Jan. 13 (Yonhap) -- Danish prosecutors could decide by the end of this month whether to repatriate the daughter of a woman who is at the center of South Korea's widening corruption scandal, an official here said Friday.

Chung Yoo-ra, the 21-year-old daughter of President Park Geun-hye's close friend Choi Soon-sil, has been held at a detention center in Aalborg, Denmark, since her arrest last week on suspicion of illegal stay.

Choi is also under arrest in South Korea on charges of abusing her ties to the president to gain various business and personal favors, including a college admission for her daughter. 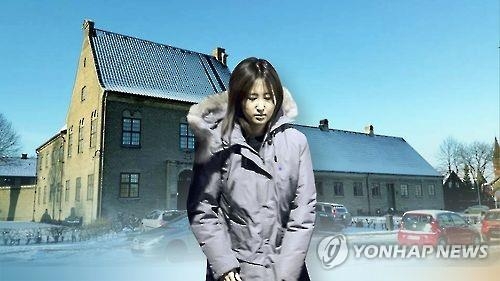 The scandal led to Park's impeachment by parliament last month and implicated numerous officials at the top levels of government and business.

"(Danish) prosecutors formally informed us that the Danish police plan to complete their investigation related to Chung's repatriation by the end of next week," Lee Kyu-chul, spokesman for a special prosecutors' team handling the scandal, said during a regular press briefing.

Danish prosecutors began to review the repatriation last week at the request of the South Korean investigation team. Based on their estimate it could take "a few weeks" with sufficient information from South Korean authorities, a decision on Chung's repatriation could come by the end of this month following the police investigation.

The team also asked Seoul's foreign ministry to look into whether Chung's German visa remains valid despite her passport's nullification earlier this week.

Chung, meanwhile, has expressed no intention to return home to face questioning over her mother's suspected crimes.

Danish prosecutors may decide on Chung's repatriation this month

Danish prosecutors may decide on Chung's repatriation this month