SEOUL, Jan. 14 (Yonhap) -- A hundred tons of eggs from the United States arrived in South Korea on Saturday, as the government seeks to control soaring prices here amid the outbreak of bird flu.

South Korea's agricultural ministry said the eggs, estimated at 100 tons, arrived through Incheon, the country's main gateway, earlier in the day, with more to come down the road. The eggs will hit local shelves starting next week after quarantine procedures.

A batch of U.S. eggs had arrived in South Korea earlier this week as samples, but it marks the first time for the country to begin full-fledged imports to tackle the soaring prices.

South Korea has been suffering from a shortage of eggs, as it has been struggling to contain an avian influenza outbreak that has struck poultry farms across the country since mid-November.

Authorities have culled more than 30 million poultry to prevent the spread, which led to further rises in the prices. 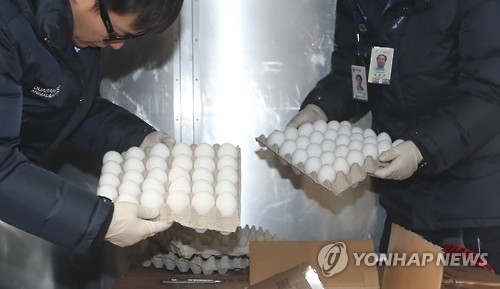 Eggs imported from U.S. arrive in S. Korea amid outbreak of bird flu

Eggs imported from U.S. arrive in S. Korea amid outbreak of bird flu