YEOSU, South Korea, Jan. 15 (Yonhap) -- A fire broke out in a popular fish market in South Korea's southwestern city of Yeosu on Sunday, damaging 116 out of the 125 stores, the local fire department said. No fatalities or injuries have been reported.

Fire authorities said that the fire incurred an estimated 520 million won (US$442,364) worth of damage, and that they are trying to find out the exact extent and cause of the fire at the Yeosu fish market. The market, which opened in 1968, is a popular tourist attraction in the port city, 455 kilometers south of Seoul.

Officials said that 58 stores on the first floor were entirely gutted, with 23 partially burned and 35 blackened with smoke.

The fire occurred early in the morning when the market was deserted, authorities said. 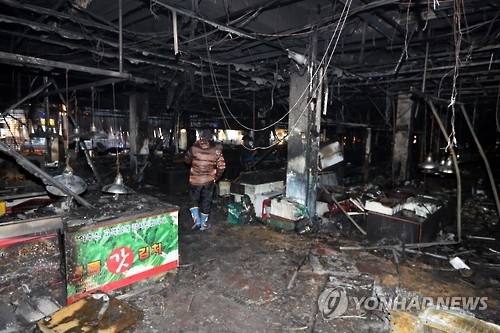