On Sunday, Ban, a prominent presidential aspirant, visited the Navy's 2nd Fleet Command in Pyeongtaek, 70 kilometers south of Seoul, where the wreckage of the ill-fated corvette Cheonan is on display -- a trip that observers say is intended to court security-conscious conservative voters.

At the naval command, Ban threw his weight behind the plan by Seoul and Washington to deploy a U.S. anti-missile system to South Korea, citing evolving security threats from North Korea.

"Given the reality of the Korean Peninsula being in an almost quasi-war situation, it is right for the government to take such a measure," Ban said.

"I understand that it is to be deployed for defensive purposes as North Korea continues to develop nuclear weapons and accumulate ballistic missile technology," he added, saying diplomatic friction with neighboring countries, such as China, can be resolved through diplomacy. 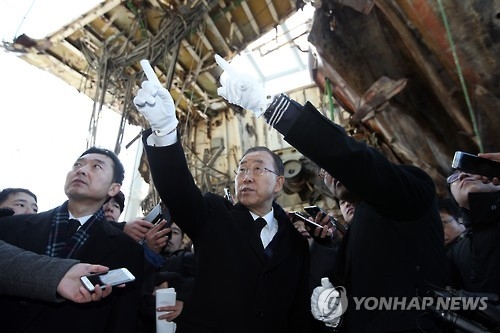 Beijing and Moscow have opposed the deployment of the Terminal High-Altitude Area Defense system, arguing it could undermine their strategic security interests.

Also at the base, Ban stressed the need for a major overhaul of legal and political institutions in line with democratic principles, apparently renewing his criticism of political circles.

"Including the constitutional revision, there should be an overall overhaul of the electoral system, the way policies are determined, and politicians' code of conduct and their way of thinking," he said.

After touching on the security issue at the naval base, Ban plans to visit the hometown of late former President Roh Moo-hyun in Bongha Village, Gimhae, South Gyeongsang Province -- a pilgrimage site for liberal politicians.

In the near future, Ban also plans to visit a traditional market in Daegu, the stronghold for conservatives; Paengmok Port in Jindo, South Jeolla Province, the site of a 2014 ferry disaster; and other regions with different political views to highlight his desire for national unity. 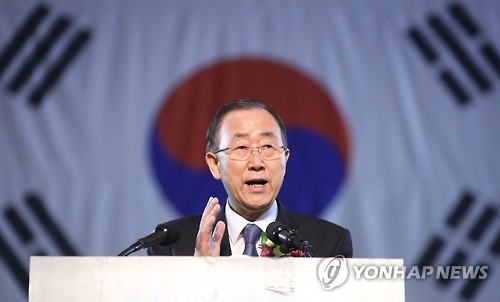