SEOUL, Jan. 15 (Yonhap) -- Special prosecutors investigating a corruption scandal involving President Park Geun-hye and her friend said Sunday that they are close to deciding whether to seek an arrest warrant against the de facto leader of Samsung Group on bribery charges.

The prosecutors said the decision could come as early as Monday and said that they are in the "final" review process regarding the warrant, taking into account various factors, including the possible impact of the arrest of Lee Jae-yong, vice chairman of Samsung Electronics Co., on the country's weak economy.

"We will not decide whether to seek an arrest warrant against Vice Chairman Lee (on Sunday)," said an official on the probe team, led by Independent Counsel Park Young-soo, declining to be named.

"We have (already) sufficiently investigated the case, and only a decision (on the warrant) is left for us to make as we are taking in various factors," he added.

Lee allegedly gave billions of won to various organizations linked to Park's confidante, Choi Soon-sil, in return for the government's backing of a controversial merger of two Samsung affiliates in July 2015. The group has acknowledged providing funds to the organizations but denied they were a bribe.

The charges under consideration include bribery and, depending on the source of the funds, embezzlement and breach of trust. Lee is accused of giving false testimony during a parliamentary hearing last month, during which he claimed to have "never" made donations expecting something in return. 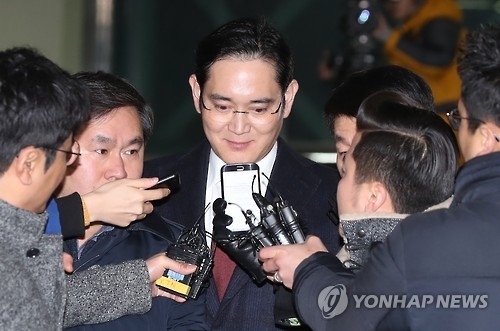