SEOUL, Jan. 15 (Yonhap) -- Free agent slugger Hwang Jae-gyun has turned down an offer from his original South Korean club, and will continue his pursuit of a major league career.

The Lotte Giants in the Korea Baseball Organization (KBO) said Sunday the 10-year veteran reiterated his desire to challenge himself in the big leagues in a recent meeting.

"We tried our best to re-sign him," the Giants said. "But we respect his decision, and we wish him all the best in the future."

The Giants general manager Lee Yoon-won said the club made Hwang "a sizable offer" but the player, while appreciative of the Giants' gesture, said he was willing to take less money to play in the majors.

After the KBO season, Hwang traveled to the United States for offseason training and held a showcase before major league scouts in Florida in November.

Aside from the Giants in the KBO, the KT Wiz also pursued Hwang. In the bigs, the San Francisco Giants, the Milwaukee Brewers and the Detroit Tigers are reportedly interested in Hwang's services.

Hwang has said he'd be even willing to sign a split contract -- which offers different salaries for the time spent in the majors and in the minors.

A source close to the player said Hwang's top priority is to sign with a team "that gives him the best opportunity to compete for a job." 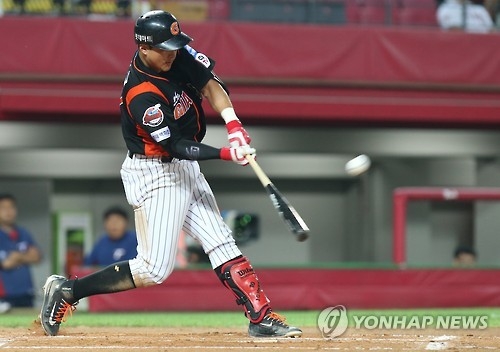