SEOUL, Jan. 15 (Yonhap) -- Park Jie-won, former floor leader and interim chief of the minor opposition People's Party, was elected as the new chairman with an overwhelming majority at the party's general convention on Sunday.

The four-term lawmaker and former close aide to late President Kim Dae-jung, won the chairmanship with more than 61 percent of the votes cast. He assumes control of the party as it tries to reinvent itself for the presidential election set for this year.

Calling the party "a big tent and a platform," Park said he will gather the necessary talent from in and out of the party to win the upcoming election and give his all to help the party best prepare for it.

He also stressed that the party will continue working hard to permanently impeach President Park Geun-hye and hold anyone responsible for the corruption scandal involving the president and her longtime confidante Choi Soon-sil.

"I will maintain the party's identity," he said, adding "I will protect the party, serve the members and work, alongside all of you, to make the party's candidate (whoever that might be) president."

The party was founded in February last year when Ahn Cheol-soo broke away from the New Politics Alliance for Democracy, which has become the main opposition Democratic Party. The minor party has 38 lawmakers in the 300-seat National Assembly. 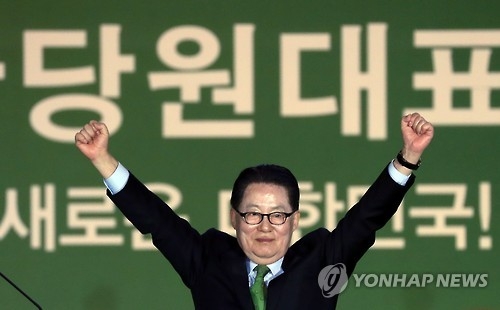