GSM said Choi signed for US$700,000 and will get a chance to compete for a big league job in spring training. If he makes the major league roster, then Choi will receive an additional $400,000 in incentives, GSM added.

The 25-year-old elected for free agency last week instead of accepting an assignment to the minors in the Los Angeles Angels system. The Angels designated him for assignment last month to make room for a new outfielder, Ben Revere, on their 40-man roster, and no club claimed Choi off the waiver wire.

Choi made his major league debut with the Halos last year after five seasons in the minors, and split his time between first base and outfield. Choi batted just .170 with five home runs in 54 games. 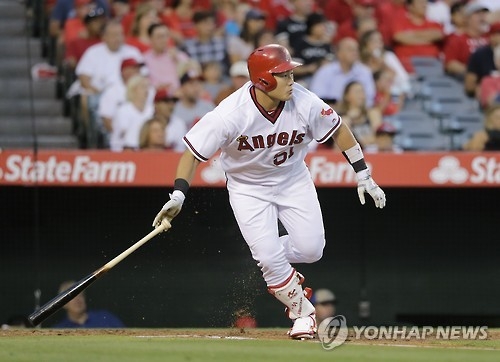 An official with GSM said the Angels guaranteed Choi "a substantial amount of money" if he choses to stay with the organization, but Choi chose free agency to give himself a better chance to reach the majors. Choi received offers from 10 clubs, including the Milwaukee Brewers, the Cincinnati Reds and the St. Louis Cardinals, before joining the Bronx Bombers. GSM said the Yankees had also shown interest in Choi in the winter of 2015, but the player chose not to sign, with veteran Mark Teixeira, coming off his ninth 30-homer season, still in the mix.

And following Teixeira's retirement after last season, Choi will be battling two other young prospects at first base: Greg Bird and Tyler Austin.

Through his agency, Choi thanked the Yankees for their choice and said he'll try to enjoy a better 2017 season than 2016.