Moon earlier said South Korea may face challenges in canceling the deployment of the Terminal High Altitude Area Defense (THAAD) battery as the agreement has already been reached by Seoul and Washington, hinting that his campaign may refrain from taking aggressive opposition. In the past, Moon voiced opposition to the stationing of the anti-missile defense system.

The opposition bloc opposes the plan to install the system in the country by May, citing concerns that such a move will hurt Seoul's ties with Beijing.

"Can a leader who becomes timid in the face of the Washington protect the national interest?" Park said through his social media account.

"The U.S. is our biggest ally and it should continue remain so," Park said. "But we should be able to say no if needed.

"(Moon) should not change words because he wants more votes," Park continued, adding decisions should only be made by looking into the best interests for the people and the country.

Park claimed the THAAD system will not effectively protect the Seoul metropolitan area with a population of 25 million, demanding a full reexamination.

Citing the adverse impact on the economy due to protest from China, Park said the economy is also an important aspect of national security. 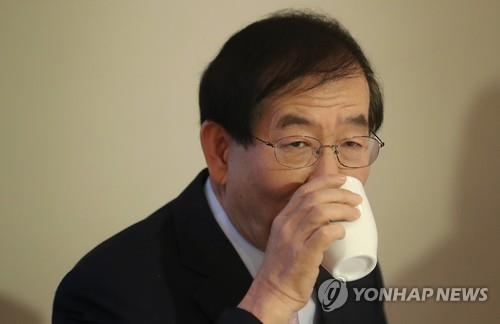