Outbound shipments of industrial parts and materials fell 4.8 percent on-year to US$251.9 billion, accounting for a record 50.8 percent of the country's overall exports last year, according to the data collected by the Ministry of Trade, Industry and Energy.

The sector's trade surplus reached $99.4 billion, down 5.5 percent from the previous year, failing to make the $100 billion level for the first time in three years.

"Spreading trade protectionism across the world and China's industrial rebalancing dragged down South Korea's trade surplus in the industrial parts and materials sector," the trade ministry said in a release.

By region, exports to China, South Korea's biggest trade partner, contributed to the overall decline as they slumped 11.5 percent on-year to $82.7 billion, while those to the United States edged down 0.7 percent to $26.8 billion.

But shipments to Japan gained 3.2 percent to $12.6 billion and those to Southeast Asian countries rose 8.9 percent to $41.5 billion over the cited period.

For the fourth quarter of last year, however, the country's exports of industrial parts and materials made a turnaround for the first time in nearly two years amid rising oil prices.

Exports rebounded to increase 2 percent on-year to $66.3 billion during the October-December period, while imports inched up 1.7 percent to $39.7 billion. The sector's surplus rose 6.3 percent to $26.6 billion. 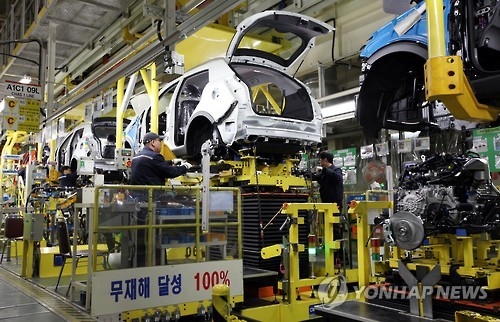