SEOUL, Jan. 16 (Yonhap) -- An opposition lawmaker on Monday challenged the electoral watchdog's decision that U.N. Secretary-General Ban Ki-moon is eligible to run for president despite his lengthy residence outside the country.

Under presidential election law, South Koreans who are at least 40 years old and have lived in the country at least five years before election day can become candidates.

Periods of working overseas for official duties and staying abroad while maintaining a residence registration at home are recognized as domestic residence.

The 72-year-old lived in the United States since 2007 when he became the U.N. helmsman before he returned home last week.

The National Election Commission issued an interpretation of the law last week acknowledging his eligibility because he lived in the country for more than five years in the past.

The commission said late former President Kim Dae-jung was also allowed to run in the December 1997 election though he lived in London for one year after 1993.

Rep. Lee Seok-hyun of the main opposition Democratic Party said on a Facebook post the law should be interpreted as requiring five years of continuous residence as of election day. He argued Kim's case is different, as he maintained his residence registration in South Korea.

Ban currently stands as the biggest threat to opposition presidential hopeful Moon Jae-in who is leading in opinion polls.

Ban also faces criticism for breaking the tradition of former U.N. heads keeping away from domestic politics. Ban has not yet announced his presidential bid, although he has suggested he may run in the election. 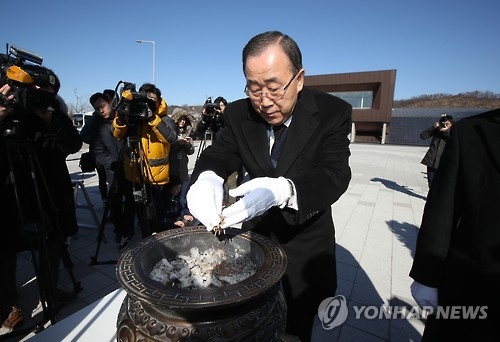 Lawmaker takes issue with Ban's eligibility to run in election

Lawmaker takes issue with Ban's eligibility to run in election