SEOUL, Jan. 16 (Yonhap) -- Choi Soon-sil, the woman accused of colluding with President Park Geun-hye for personal and business gains, appeared as a witness in the president's impeachment trial Monday.

Choi, who has been jailed in connection with the scandal, arrived at the Constitutional Court in a blue government van and was escorted inside by officers to testify at the fifth hearing of Park's trial.

She did not answer reporters' questions about whether she thinks the president should be removed from office, acknowledges taking bribes or reports she made weekly visits to the presidential office. 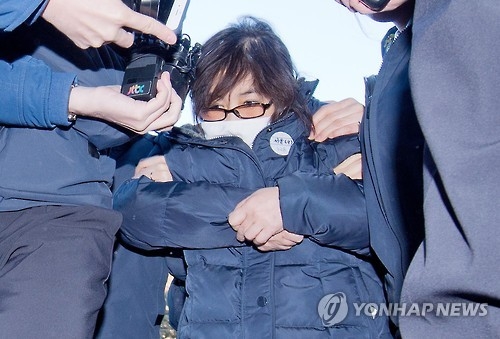 Park was impeached by parliament on Dec. 9 on suspicion of colluding with her longtime friend Choi to extort money from conglomerates, but she has yet to appear at her own trial.

Choi has denied all charges against her, including abuse of power, coercion and attempted fraud.