Local industry leader Korean Air Lines Co. is set to introduce Boeing's latest B787-9 Dreamliner in March, along with the CS300 in June.

The B787 is a midsize jet airliner with up to 290 seats, and will likely be operated on routes to and from Los Angeles, Paris and London.

The CS300 is a small aircraft with about 130 seats, developed and built by Canadian manufacturer Bombardier Aerospace. It is expected to serve domestic routes and short-range international flights, the informed sources said.

Asiana Airlines Co., too, plans to introduce a new aircraft as a way of providing new and improved flight experiences to its passengers.

The airline will begin operating the new A350-900XWB from European manufacturer Airbus in April.

The new aircraft, in addition to offering new flight experiences, will likely improve the South Korean airlines' safety, as well as their profitability.

According to company officials, the new B787 is significantly lighter than conventional aircraft, with nearly 50 percent of its body made of carbon fiber reinforced plastic, also making it up to 20 percent more efficient in terms of fuel mileage. 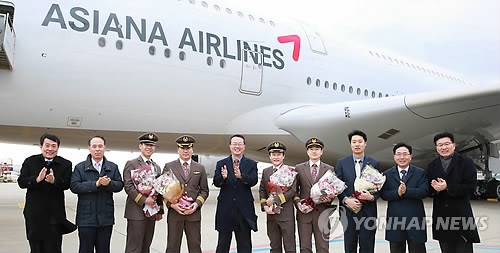 The A350 is said to have up to 70 percent of its body and wings made of the advanced material.

South Korean flag carriers have been continuously replacing their aged aircraft since all seven airlines, including five low-cost carriers, here pledged in May 2015 to keep the age of each and every aircraft at below 20 years.

There currently is no limit on the age of an aircraft, according to officials from the transportation ministry.