SEOUL, Jan. 16 (Yonhap) -- The Bareun Party, a splinter group of the ruling Saenuri Party, on Monday condemned Moon Jae-in, a presidential hopeful from the liberal bloc, on his inconsistent stance on the deployment of an advanced U.S. missile defense system in the country.

Amid the controversies, Moon said a new administration should find solutions for the deployment of the Terminal High Altitude Area Defense (THAAD) battery but claimed it is not easy to cancel the Seoul-Washington agreement.

The party, which fixed its official English name after having tentative names of Barun or Righteous Party, claimed Moon's ever changing political stance is causing confusion among the people.

"Last year, Moon said the deployment of the THAAD battery should be reconsidered by the incumbent administration after Seoul announced the decision to install the system," Rep. Choung Byoung-gug of the Bareun Party said.

"But following the candlelight rallies, he demanded the decision should be made by the next administration. Now he is saying the decision cannot be easily changed," Choung added, referring to Moon's latest remark where he hinted at a flexible stance on the THAAD battery issue.

South Koreans have been holding weekly candlelight protests on Saturdays in central Seoul for months now, demanding President Park step down for her alleged links to a corruption scandal surrounding the confidante Choi Soon-sil.

The party also condemned Moon for not keeping his word given last year, where the former opposition head said he would retire from politics if the Democratic Party fails to win approval from South and North Jeolla Province.

Choung said the flip-flopping stances of Moon undermines his capability as a presidential candidate. 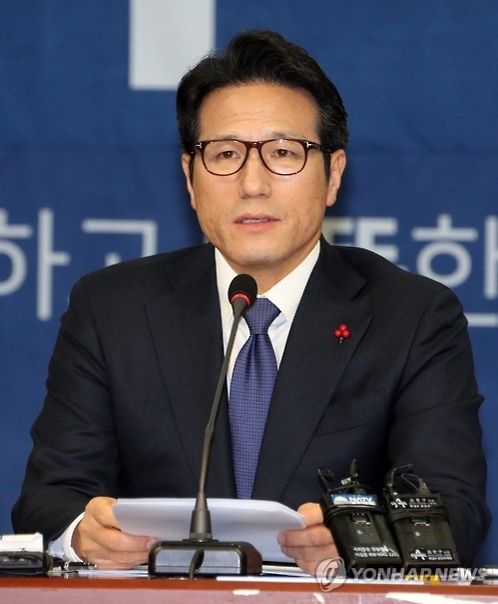