SEOUL, Jan 16 (Yonhap) -- Acting President and Prime Minister Hwang Kyo-ahn on Monday renewed his calls for political parties' support in normalizing state affairs that have been hamstrung by a corruption scandal involving President Park Geun-hye and her longtime friend.

Hwang also reiterated his commitment to maintaining close communication with political circles during a dinner gathering with the leaders of the ruling Saenuri Party, where participants vowed to work together for party-government unity.

The event marked Hwang's first meeting with the entire leadership of the ruling party since he took over as the acting president on Dec. 9 after Park was impeached by parliament over the scandal.

"To resolve tasks that lie ahead of us, what is more important than anything else is cooperation from political circles," Hwang said. "While closely communicating with the political circles, I will exert all efforts to stabilize state affairs." 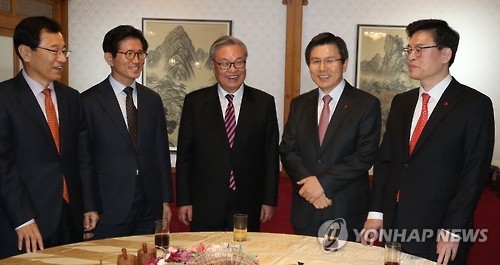 In Myung-jin, the party's interim leader, noted that the ruling party has not been able to effectively support the government, as it has been embroiled in an internal conflict over his aggressive personnel reform.

In has spearheaded the efforts to remove some of party members loyal to the scandal-hit president to clear the deck to refurbish the party. But the move has faced strong resistance from Park's staunch loyalists.

"(We will) strive to restore public support and love by quickly shoring up the party," In said.