Moon received an approval rating of 26.1 percent, down 0.7 percentage point on-week, according to a survey conducted by RealMeter between Monday and Friday.

His closest rival Ban Ki-moon, who returned to South Korea Thursday after serving two terms as U.N. chief, saw his approval rating advance 0.7 point to 22.2 percent. His support began to increase on Wednesday.

Seongnam Mayor Lee Jae-myung was in third at 11.7 percent, trailed by Rep. Ahn Cheol-soo, former head of the People's Party, with 7 percent.

The poll was conducted with 2,526 South Korean voters, with a margin of error of plus or minus 1.9 percentage points.

In a separate survey conducted with 1,010 adults last week under a six-way race scenario, Moon posted an approval rating of 34.4 percent, trailed by Ban and Ahn with 18.3 percent and 11.2 percent, respectively.

By party, the Democratic Party was the most popular with 36 percent, trailed by the Saenuri Party with 16.2 percent and the People's Party with 13.2 percent. 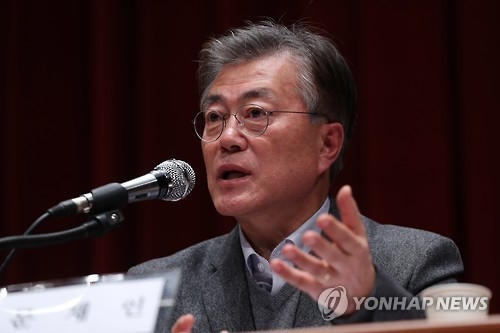