SEOUL, Jan. 16 (Yonhap) -- A Seoul-based association of American states has awarded a plaque of appreciation to U.S. Ambassador to South Korea Mark Lippert for his contribution to better economic and business ties between the two partners.

The Association of American State Offices in Korea (ASOK) delivered the plaque to the ambassador Thursday at the U.S. Embassy in central Seoul, according to the association.

"U.S. Ambassador to Korea Mark Lippert received an appreciation plaque from the ASOK for his persistent and successful efforts to create business opportunities between the United States and Korea," the association said.

ASOK is the only U.S. state-level organization in Korea, consisting of 17 U.S. state government offices.

Lippert, who started his duty as ambassador here in late 2014, will return home on Jan. 20 in time for Donald Trump's inauguration as the next U.S. president.

Known for his close personal ties with President Barack Obama, Lippert has been credited with his efforts to actively engage with the South Korean people, which helped him earn the recognition of being one of the most beloved American ambassadors ever. 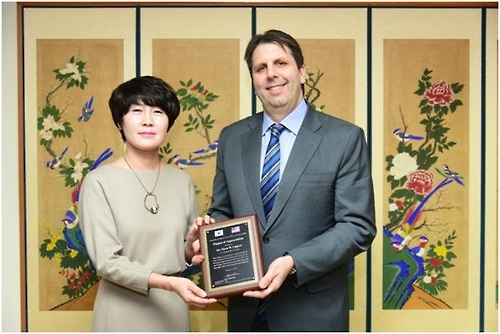