SEOUL, Jan. 16 (Yonhap) -- Acting President and Prime Minister Hwang Kyo-ahn is preparing to hold a press meeting next week to explain his direction for state management this year, his office said Monday.

"We are preparing (for a press meeting) to take place on Jan. 23, Monday," Hwang's aide told reporters, declining to be named. "Hwang will deliver his opening remarks, which will be followed by a question-and-answer session."

Observers said the acting president is expected to use the meeting to call for national unity in the face of a series of diplomatic challenges such as escalating friction with Beijing over the planned deployment of a U.S. anti-missile system to the peninsula and a reignited row over Tokyo's wartime sexual slavery.

He is also likely to call for parliamentary cooperation in quickly normalizing state affairs that have been hampered by the corruption scandal involving President Park Geun-hye and her longtime friend Choi Soon-sil.

Hwang took over as the acting president on Dec. 9 after Park was impeached by parliament over the scandal. 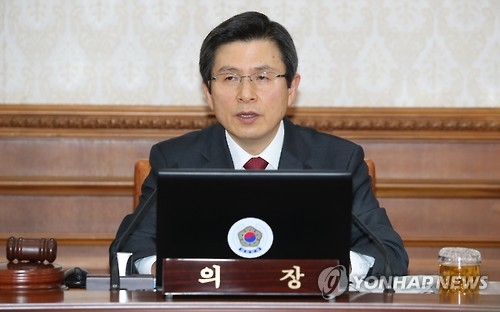