Seoul, the reigning K League Classic champions, said they've accepted an offer from Shijiazhuang and Adriano's request for the transfer. The 29-year-old forward earlier Monday posted photos of himself in Shijiazhuang's training kit and holding the club's scarf on his Facebook.

"We thought long and hard about Adriano's transfer, but since the player wanted to move to the club that offered him a better deal, we decided to accept his request for transfer," Seoul said in a statement.

Chinese media have reported that Shijiazhuang, a newly relegated second division side, will pay a transfer fee of US$4 million and pay Adriano $3 million a season.

Adriano will have his second stint in China. He previously played with Dalian Shide from 2011 to 2013.

The former Bahia and Palmeiras forward first landed in South Korea in 2014, playing for second-tier club Daejeon Citizen. Adriano joined Seoul in 2015 and scored 25 goals in 43 K League matches for them.

Last year, Adriano scored 35 goals in all competitions -- K League, Asian Football Confederation (AFC) Champions League and Korea Football Association Cup -- to set a new single season scoring record in the country. In 2016, he was the top scorer at the AFC Champions League with a record-tying 13 goals.

Adriano was the second leading scorer in the K League Classic last season with 17 goals, three behind Jung Jo-gook, but he helped Seoul win the first division title. 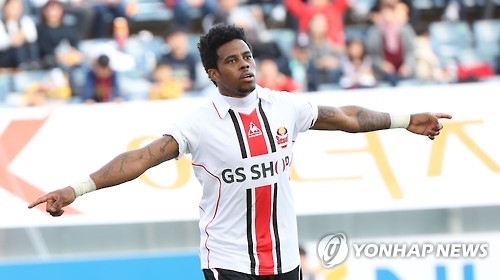