The 31st Golden Disc Awards ceremony held on Friday and Saturday featured a red carpet entrance at its grand opening, where K-pop idols, including EXO, chatted with reporters and greeted fans as well as expressed their feelings on being present at the occasion.

The Golden Disc Awards recognize and honor some of the hottest K-pop stars who have made outstanding achievements throughout the year. The awards are given out based on three categories -- album, digital and rookies. This year's event marked EXO's fourth consecutive year since 2014 to receive the grand prize. 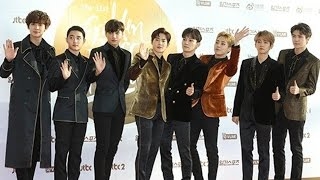