SEOUL, Jan. 16 (Yonhap) -- Former U.N. Secretary-General Ban Ki-moon on Monday called impeached President Park Geun-hye to offer a New Year's greeting and express his gratitude for her support of the international organization's activities during his 10 years of service.

In the two-minute telephone conversation, Ban also voiced hopes that Park could "cope well" with the alleged corruption scandal involving her and her longtime friend, which led to parliament stripping her of her executive power early last month.

"I should have met you face-to-face and offered my greeting, and I feel sorry that I was unable to do so," Ban said during the talks that began at around 10 a.m.

Park, in turn, wished Ban good health and luck in the new year while appreciating his work as the U.N. helmsman.

"Since your return on Jan. 12, I heard you carried out a hectic schedule," Park said. "You (as a U.N. chief) have made many achievements, and (you've) done hard work and (I) congratulate you (on your return home)."

The talks came amid rumors that Ban might not openly contact the unpopular president at a time when he is apparently preparing for a presidential election set for this year. 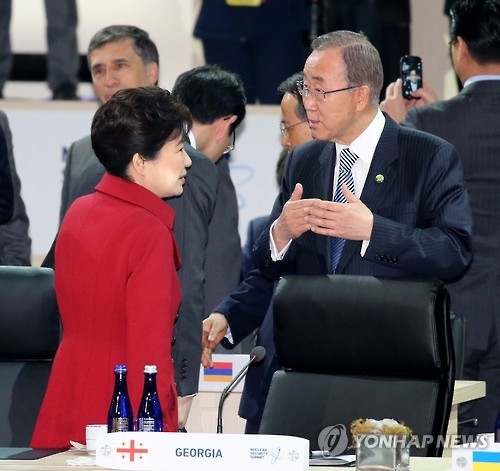