The six-member act on Saturday greeted fans and gave a sneak peak of their highly awaited performance as a special event to the fans who came all the way to congratulate the group for receiving an award at the 31st Golden Disc Awards ceremony held at the KINTEX exhibition center in Goyang, northwest of Seoul.

"Thanks to all of you, we are once again determined to put on a superb performance today. We have prepared a special dance from the intro, posing a contrast to our previous showcases," the members said, elevating the curiosity of the fans to the fullest.

The Golden Disc Awards recognizes some of the hottest K-pop stars who have shined throughout year. Artists are honored in three categories -- album, digital and rookies. At the 31st ceremony, VIXX received a bonsang award for its outstanding albums and popularity last year.

The group carried out a year-long project entitled "VIXX 2016 Conception," comprised of three albums -- "Zelos," "Hades" and "Kratos." The trilogy project was themed around gods that appear in Greek mythology.

VIXX was formed in 2012 on cable broadcaster Mnet's survival reality show MyDOL through viewer votes. The members are N, Leo, Ken, Ravi, Hongbin and Hyuk. The group is predominantly known as a concept group where its overall performance -- including music, lyrics, choreography and stage projection -- is intertwined to tell a story. 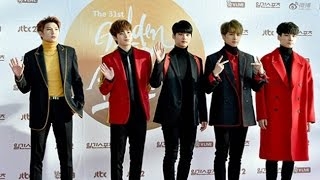