SEOUL, Jan. 16 (Yonhap) -- South Korea's retailers are trying to attract more Chinese tourists during the upcoming Lunar New Year's holiday later this month with the focus on private tourists rather than those in groups, industry sources said Monday.

About 140,000 Chinese tourists are expected to visit South Korea during the biggest Chinese holiday season this year, up 4.5 percent from a year earlier, an official with the Korea Tourism Organization said. 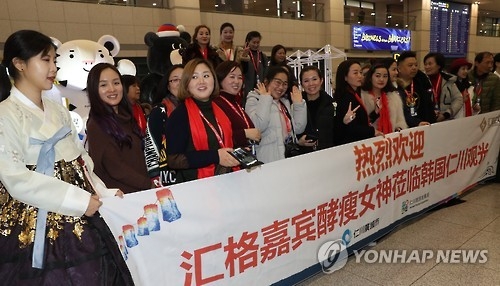 Lotte Department Store said it has introduced an immediate tax refund system for foreign tourists while providing a tour program for foreigners that includes rides in a rickshaw while wearing the traditional Korean costume hanbok.

A 10,000 won (US$8.40) traffic card will be provided to any foreign tourist who carries a Lotte Department Store brochure from any outlet in Incheon International Airport, a Lotte official said.

Shinsegae Department Store said it will provide a 25,000 won voucher to any foreigner who purchases at least 500,000 won in goods with a Union Pay card. Foreign tourists can visit a one-stop service center for foreigners at the fourth floor of the store's headquarters in Myeongdong, downtown Seoul, for interpretation, tax refund and express mail abroad.

Shinsegae Duty Free said it will provide foreign tourists who buy any product worth more than $1 with a ticket for free entrance to N Seoul Tower and Gyeongbok Palace.

Other gifts include two free meal tickets to a Chinese restaurant and one ticket for free admission to a spa. 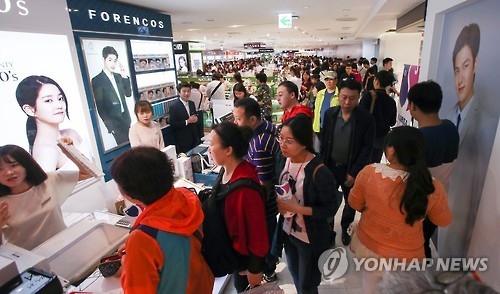