Last year, North Korea staged so-called 70-day and 200-day campaigns of loyalty in an apparent bid to give an impression that it had not been affected by tough international sanctions.

A campaign of loyalty is North Korea's effort to mobilize its people to maximize production in a set period of time.

Seoul's unification ministry said it does not rule out the possibility of another massive North Korean work-hard campaign to implement orders handed down by Kim.

"There are no specific signs (for the North to kick off such campaigns)," Jeong Joon-hee, a ministry spokesman, told a regular press briefing. "But we think that there is a possibility that North Korea would launch a "speed battle" to meet tasks outlined in (Kim Jong-un's) New Year's message. 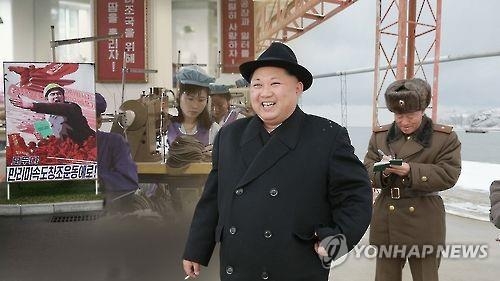 The North's leader originally set the deadline for building it at the end of 2016, but massive floods that hit the country's northeastern areas last year drained resources for the construction, causing delays.

The Ministry of Unification said that North Korea's "show-off" project targets the privileged class in Pyongyang, not ordinary North Koreans.

"The completion of the district may become a feat for the North's leader, but we do not think it would help the country as a whole," Jeong said.

Thae Yong-ho, a former North Korean diplomat who defected to Seoul last year, said in December that the deadline for the construction of Ryomyong Street is pushed back to April 15, the 105th anniversary of the late founder Kim Il-sung's birthday.

He told Yonhap News Agency that a set of sanctions put severe strain on Kim Jong-un's policy enforcement including the construction of Ryomyong Street.

North Korea's leader said at his New Year's message that the district "should be completed on the highest level."

Minjok Tongshin, a U.S.-based pro-North Korea website, said that about US$2.8 million is being injected into the project.

Ryomyong Street, which covers about 900,000 square meters, will house about 4,800 households and 28 support facilities for residents, it said.

Local North Korean experts predicted the reclusive country may launch another work campaign this year to implement a five-year strategy for economic development unveiled by its leader at a party congress in May 2016.

At the congress, Kim did not spell out detailed plans to prop up the country's moribund economy, but emphasized efforts to carry out the economic blueprint in the face of tougher U.N. sanctions over its nuclear and missile tests.

He stressed in his New Year's address that it is necessary to "actively wage the all-people charge for attaining the goal of five-year strategy by dint of the self-reliance and self-development," according to the North's state media.