GEOJE/BUSAN, Jan. 16 (Yonhap) -- Former U.N. Secretary-General Ban Ki-moon said Monday he will soon decide whether to join a political party, as he is apparently seeking to run in South Korea's presidential election this year.

He cited a problem in raising funds as one of the reasons why he is considering becoming a member of an existing party.

Chances appear slim that he will create a political party himself, with the presidential polls just months away.

"In the end, I think I will have to be with a party, whatever it is," he told reporters during a visit to a southeastern province.

Ban said he will offer some more details of his policy vision after Lunar New Year's Day next week.

On the controversial issue of the timing of revising the Constitution, he said it would be difficult before the presidential election, originally set for December. If the Constitutional Court upholds the National Assembly's impeachment against Park, however, the election will be held within 60 days.

Less than a week after his return to South Korea after leading the U.N. for a decade, he has launched a politically tinged tour nationwide. 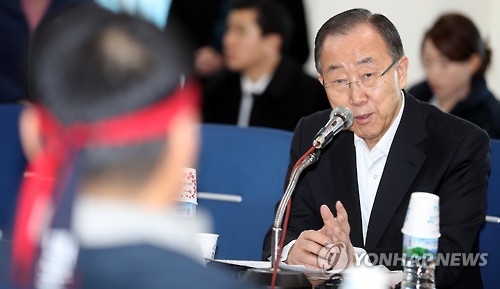 Later in the day, Ban visited the U.N. Memorial Cemetery in Busan and held a town hall meeting with university students.

During a meeting with reporters at the cemetery, Ban commented on a 2015 deal between Seoul and Tokyo over Japan's wartime sexual slavery.

He said if the deal entails an agreement to remove a statue symbolizing Korean victims, it would be "wrong."

"My principle (about the deal) is that it must be about addressing the victims' resentment," he said. 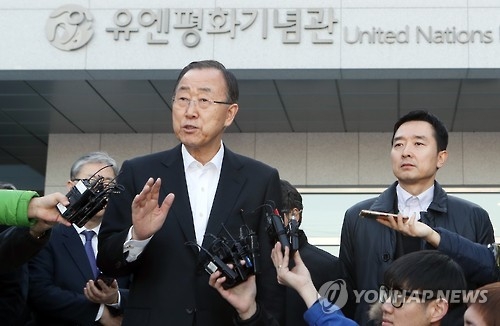 Japan has demanded the removal of the monument in front of its embassy in central Seoul, saying it was part of the deal. Seoul has maintained it has no authority to move the statue set up by civilians.

On the issue of regaining wartime operational control (OPCON) from Washington, Ban said when the security situation improves on the peninsula, Seoul should take steps towards regaining control.