North Korea's Uriminzokkiri unveiled a 171-page book in PDF form which carries photos of Kim's on-site inspections and other public activities and his remarks recorded since he assumed power in late 2011. 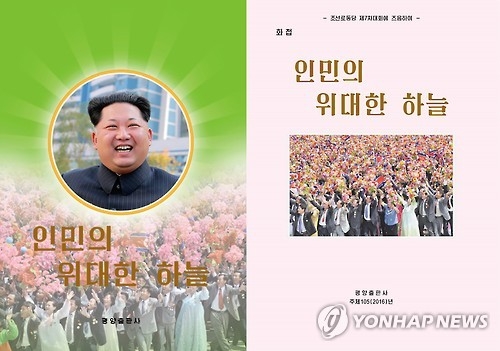 The pictorial book, titled "The Great Sky for People," includes photos related to North Korea's rocket launches in what Pyongyang claims to be a peaceful space program.

Under the incumbent leader's reign, the North launched long-range rockets in December 2012 and February 2016, insisting that it put a satellite into orbit as part of its efforts to use space for peaceful purposes.

The book also contained photos of the country's nuclear and missile development such as the scene of Kim's approval for its fourth nuclear test in January 2016 and his inspection of the launch of a ballistic missile from a submarine.

For North Korea, this year is full of key anniversaries which could highlight the personality cult of the Kim dynasty that started from late founder Kim Il-sung.

This year also marks the fifth anniversary of the current leader's rise to power as heads of the ruling Workers' Party of Korea (WPK) and the now-defunct state organ National Defense Commission (NDC).

Kim Jong-un's public activity has been on the decline since 2013 as he seems to have consolidated his power base, reducing the need to show his public presence, Seoul's unification ministry said last week.