CHANGWON, South Korea, Jan. 16 (Yonhap) -- The oldest hitter in South Korean baseball said Monday he will retire after the 2017 season.

Lee Ho-jun of the NC Dinos in the Korea Baseball Organization (KBO) said his 21st season will also be his last. Lee, who turns 41 next month, made his KBO debut with the Haitai (now Kia) Tigers in 1996. He joined the SK Wyverns before the 2000 season and stayed there for 12 seasons, winning three Korean Series championships in 2007, 2008 and 2010.

Lee then signed with the Dinos for their inaugural season in 2013, and enjoyed a career renaissance of sort. He has hit at least 20 home runs in each of the first four seasons with the Dinos after not reaching the plateau for the previous six seasons. He has averaged 90 RBIs per season in that span, and had 110 RBIs in 2015, just two shy of his career-high set 11 years earlier. 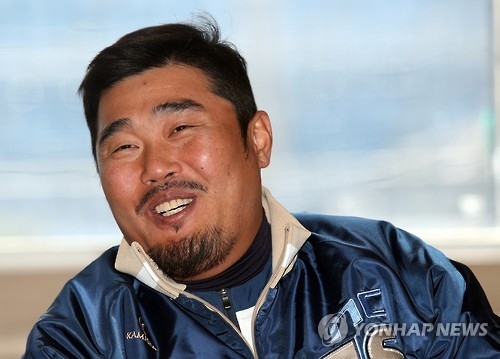 "I wanted to leave while I was still a pretty good player," he said at Masan Stadium in Changwon, South Gyeongsang Province, 400 kilometers southeast of Seoul. "For a few years, I'd thought about when I should call it quits. And I didn't want to just hang around out of my personal greed."

Lee said he will spend the upcoming season thinking about what he'll do once his playing career is over.

"Be it coaching or doing commentary on television, I think I'll find a way," he said. "I think younger players should have more opportunities to play."

Lee said he recently spoke to fellow 40-year-old veteran, Lee Seung-yuop of the Samsung Lions, about the future after baseball. Lee Seung-yuop, the KBO's career home run leader with 443, also plans to retire after 2017.

"Since he announced his retirement plans before I did, we had a lot to talk about," Lee Ho-jun said. "I can't even compare myself to such an incredible player, and it was great to see someone like that was preparing for a memorable ending to his career."

By bringing his championship-winning experience to the expansion franchise, Lee has been credited with helping instill a winning culture in the Dinos from the get-go. They made their first postseason in just their second year, and reached the championship Korean Series for the first time in 2016.

He's a well-respected veteran in the club house, but Lee actually thanked his younger teammates for motivating him to stay in the league as long as he has.

"When I first arrived here, I was surprised with everyone's work ethic," he said. "I wanted to share with these young guys what I'd learned over the years. They've been great teammates and they've kept me going this far."

The Dinos were swept by the Doosan Bears in last year's Korean Series, and Lee said he desperately wants to finish his career with another championship.

"I really want to be a part of the first championships team in the Dinos' history," he said. "And this is my last opportunity. I hope this dream comes true."

Lee said he won't be going after any milestones, but he does want to play hard and run out every grounder to set an example for others.

"I will pour everything I have into every at-bat and every pitch, knowing I'll never be back," he added. "I want to have such a great season that it will force me to think twice about retiring."

Lee is six months older than Lee Seung-yuop, and is the second-oldest player overall in the KBO behind Choi Young-pil, the 42-year-old pitcher for the Hanwha Eagles.

Oldest hitter in S. Korean baseball to retire after 2017 season

Oldest hitter in S. Korean baseball to retire after 2017 season