SEOUL, Jan. 17 (Yonhap) -- The current sanctions-oriented approach to North Korea has proved to be a "failure" and a possible alternative might be to try to freeze the country's nuclear program and resume negotiations right away, a North Korea expert said.

In an interview held with Yonhap News Agency on Friday, Andrei Lankov said that seeking exchanges with and getting more outside information into the North can be the most effective method in inducing changes and opening up the reclusive state.

Born and educated in Russia, Lankov is known for his expertise on North Korea and unique experience of studying in the North for about a year in the 1980s. He has been teaching at Kookmin University, based in Seoul, since 2004.

"It would not be easy, but the one and only compromise might be to freeze its nuclear weapons program," Lankov said. "The North would not give up its already developed nuclear weapons but could promise not to advance it further.

"Of course, there should be a precondition, which is material and political compensation. It would not go that way without proper compensation. The North is a country that does not act free of charge," he added.

The Russian professor called the current pressure and sanctions-oriented approach to the North's denuclearization a "failure," saying that it will not be successful in inducing a meaningful change in the North's behavior.

"What is important is China's stance, but Beijing sees chaos in the North and South Korea's possible absorption of the North as a more serious threat than its nuclear weapons. China can put pressure on the North, but it would not go as far as to prompt instability there," he said.

He admitted that the likelihood of the North accepting a proposal for a freeze and engaging in negotiations remains slim as the North and its leader Kim Jong-un would not run the risk of a regime collapse after giving up nuclear weapons, a case that they have seen in recent history.

"As far as I know, (Muammar) Gaddafi is the only dictator in modern history who gave up nuclear weapons. In the early 2000s, he desisted the country's nuclear weapons in return for economic compensation promised by the U.S., but what was the outcome? He was killed and the country has become a paradise of terrorism," he said.

"When the Libyan dictator abandoned its nuclear ambitions, some U.S. media called for North Korea to learn its lesson from him but ironically, it seems that Pyongyang has learned a different lesson (that its regime could be threatened if it lets go of its nuclear weapons)," he noted. 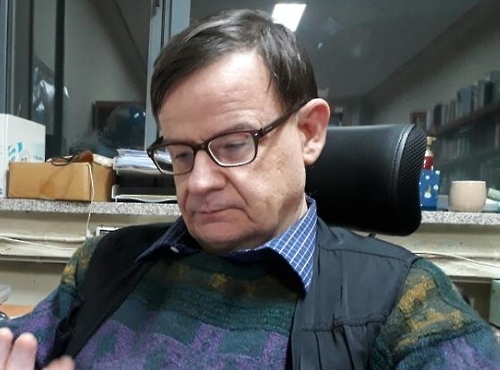 He also cited as a major hurdle for a breakthrough Washington's unwillingness to "set a bad precedent" that could prompt other countries to follow in the North's footstep in nuclear development.

Despite the slim chances, Lankov said seeking a freeze and resuming talks deserve a serious try at a time when every other way appears to have been exhausted.

"Such a compromise seems to be a long shot given the political situations both in the U.S. and the North. But this is the only possible way out," he argued.

To induce changes and an opening of the North, Lankov placed emphasis on expanding "exchanges" and providing outside information to North Koreans so as to make them recognize the reality they have to face in daily life compared with other countries.

"When I was a kid back in the 1960s, it was an open secret in the Soviet Union that people in such capitalist countries as the U.S. and Japan lived much better than us since we could see their films, read their books and hear about what it's like to live there from those who traveled overseas," he said.

As for the current diplomatic situations facing South Korea, Lankov said that it is experiencing "unprecedented" challenges, citing the chilled relationship with major countries, including China and Japan. A leadership void caused by the impeachment of its president is also making things worse, he noted.

"It is quite challenging. It has been unprecedented for South Korea to face what many see as a crisis in its relations with the most important players -- the U.S., China, Japan and North Korea," he said.

"What is more worrisome is that there is no leadership who can handle all of this. South Korea can be compared with a ship without a captain. The problem is that the wind and waves are getting strong," he added.

In particular, he cited the ongoing diplomatic feud with China over South Korea's decision to allow the U.S. to install its missile defense system called THAAD in the country.

Seoul and Washington claim that its deployment is solely aimed at countering growing threats from the North, but Beijing voices its strong opposition, arguing that it will hurt its national strategic interest.

China has taken what is viewed as diverse retaliatory measures against South Korean products over the past few months, though it denies any official involvement.

"South Korea seems to start experiencing China-style sanctions, which are being done stealthily, without open admittance. This has just begun. People say that they can persuade Beijing on THAAD, but it is wrong and naive," he said.

"As a sovereign country, China cares only about its own security. There might be no room on that matter," he said. "No matter what explanations the South would provide, China will not listen to it, only to apply more and more economic pressure going forward."

(Yonhap Interview) Only way out might be to freeze nuke program, resume talks with N.K.: expert

(Yonhap Interview) Only way out might be to freeze nuke program, resume talks with N.K.: expert