SEOUL, Jan. 16 (Yonhap) -- Shin Moon-sun, a former footballer now working as a college professor, was denied the top job in South Korea's pro football league on Monday after coming up short in an election.

Shin, 58, was the only candidate in the K League commissioner election and needed a majority of the votes from 23 electoral delegates to succeed Kwon Oh-gap. However, the footballer-turned-professor garnered only five votes from the delegates comprised of 21 representatives from the K League clubs and two Korea Football Association (KFA) officials.

Shin was trying to become the first former player to become the league commissioner. Since the K League's administrative body was formed in 1994, all of its leaders have been owners or executives of local conglomerates.

Shin ended his playing career at 27 due to an injury. After retirement, the former Yukong Elephants FC player made a name for himself as one of the top football commentators in the country.

In 2014, Shin became the president of South Korean club Seongnam FC but quit a year later. He now teaches at Myongji University Graduate School of Archival Sciences in Seoul.

Following Shin's leadership bid failure, the league office said Kwon, 65, will remain in his post until a new leader is elected. Kwon, vice chairman of shipbuilding giant Hyundai Heavy Industries Group, previously announced he would not seek a second term due to his company issues. 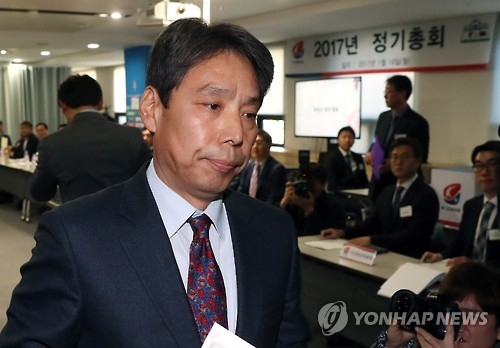 There were doubts whether Shin could win the election since he is perceived to be in opposition to the mainstream football community. In his previous press conference, Shin claimed he'd already lost five votes in the election, two from the KFA and three from the clubs affiliated with the KFA leaders.

Critics against Shin have also been pointing out that he hasn't presented reliable plans to secure the league's title sponsor that usually offers more than 3 billion won (US$2.5 million) a year. It has been a custom in the K League for a company affiliated with the commissioner to become the headlining sponsor.

Last year, Hyundai Oilbank Co., one of South Korea's major oil refiners, was the title sponsor of the K League since Kwon was then CEO of the company.

Shin, who holds a Ph.D. in sports administration, said he wanted a complete overhaul of the league's operation system from marketing to disciplinary management. He first called for regaining fans' trust by reinforcing punishment on corruption. He also touched on the league's revenue distribution issue to help second-tier pro clubs and teams run by municipal governments.

Shin said he accepts the result, but that doesn't mean he lost.

"I've played football in my life and I've always accepted the result of the game," he said after the election. "I might have lost in numbers, but I think I represented those who wanted a change."

The former KFA director claimed that he fought against "a candidate who didn't register," pointing the finger at Kwon. According to Shin, Kwon allegedly promised to inject 15 billion won into the league for the next four years and told electoral delegates Shin would not be able to provide such an amount of money.

"I was in a bizarre election," he said. "This illegal election campaign will be remembered in the history of pro football."

Shin, however, said he isn't thinking about challenging the election result. Under the rule, he has seven days to appeal.

"The game is over," he said. "I hope the league can present healthy products to consumers."

Shin said he will go back to his school and keep at his studies on football.

"I will think long and hard about whether I should talk about revolutionizing pro football again," he said. "But I will keep my eyes on pro football."