Ahn polled at 7 percent in the latest survey conducted by RealMeter, hovering below Moon Jae-in, former head of the Democratic Party, and ex-U.N. Secretary-General Ban Ki-moon, who received 26.1 percent and 22.2 percent, respectively.

"I have been making reasonable decisions, but this may be clouded in this time of confusion," Ahn said, adding he will receive a fair evaluation when such uncertainties are lifted.

"There are many people taking a wait-and-see stance as there were 'shy Trump supporters' during the recent U.S. presidential election," Ahn said.

Ahn noted the People's Party garnered 26.74 percent support in the parliamentary elections in 2016 despite polls showing its approval rating at 14 percent.

The former head of the People's Party said he is also better prepared than other potential contenders.

"In the upcoming presidential election, the people will especially focus on (candidates') leadership," Ahn said. "There must be capable leadership that can create political achievements by overcoming challenges, and leadership that takes responsibilities and prepares for the fourth industrial revolution."

"In that sense, I am better qualified and confident than others," he added.

Ahn said South Korea should scrap the Seoul-Tokyo agreement clinched in 2015, adding Japan is making moves that violate the deal.

"Along with government-level negotiations, we should avoid a situation that excludes the victims in the procedures and leaves their hearts wounded," Ahn said.

Under the deal Tokyo agreed to provide funds to support the sexual slavery victims, euphemistically called comfort women during its colonial rule of the Korean Peninsula. The opposition bloc claims the deal was made too hastily, and Japan still lacks a sincere apology.

Ahn said he is open to joining forces with Ban under the condition that he holds no link with the Park administration and holds a willingness to reform the vested class of society. 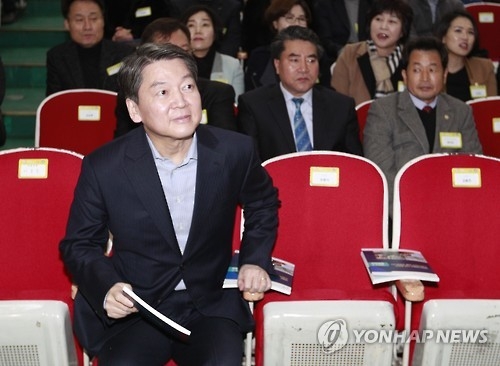