Hwang made the remarks during his meeting with the Coast Guard staff on a patrol boat docked at a pier in Incheon, west of Seoul.

"As a result of our government's continued efforts to strengthen the clampdown on illegal fishing near the Northern Limit Line (de facto inter-Korean sea border), illegal fishing cases have substantially declined with the volume of fish caught by our fishermen having significantly increased," he said.

"I order you to respond firmly to any activities that violate our sovereignty by intruding into our territorial waters," he added.

The issue of illegal fishing has been a source of diplomatic tension between Seoul and Beijing. Tensions flared up anew in October when a South Korean patrol boat sank after being intentionally rammed while pursuing a Chinese boat that was fishing illegally.

As part of efforts to defuse friction between the two countries, the two sides agreed in December that any boat carrying unnecessary equipment such as pikes or spears that can be used as weapons to resist maritime inspection will be immediately penalized. 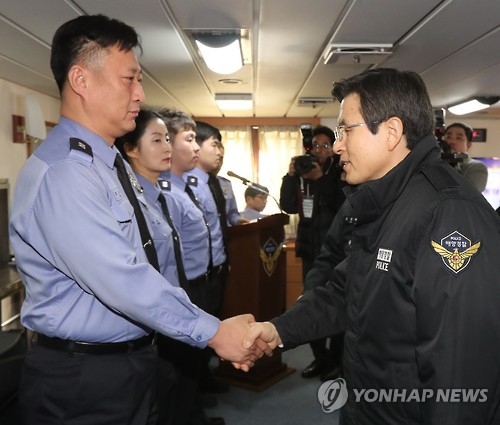