During a meeting with Iraq's Foreign Minister Ibrahim Al-Jaafari in Seoul, Hwang also expressed his appreciation for the Middle East country's support for South Korea's policy on North Korea's denuclearization.

"The two countries have developed their cooperative ties based on a long history of cooperation and a mutually complementary economic structure," Hwang said.

"I ask for the Iraqi government's interest and cooperation to ensure that (bilateral) economic cooperation continues to develop in the future," he said.

The Iraqi minister, in turn, voiced hopes that more South Korean firms can make inroads into the Iraqi market. He also highlighted Iraq's opposition to any weapons of mass destruction in a reference to a nuclearizing North Korea.

Al-Jaafari's four-day schedule, which was arranged on the invitation of the South Korean government, began on Sunday.

On Tuesday, he is set to meet with his South Korean counterpart Yun Byung-se to exchange views on a series of bilateral and regional issues, including security on the Korean Peninsula and the Middle East. 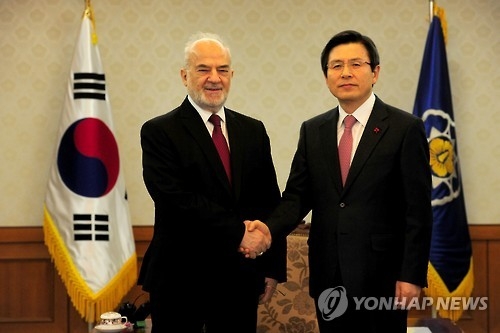